The Queens International Night Market is a family-friendly event at the New York Hall of Science in Flushing Meadows Corona Park. The open-air night market features independent vendors selling merchandise, art, and food at affordable prices in addition to cultural performances and entertainment. Being a night market, it’s only opened on Saturdays from 6PM to Midnight, from April 22nd to August 19th and then September 30th to October 28th (tickets are required for preview nights April 22nd and April 29th). We had the pleasure to interview John Wang, the founder of the Queens International Night Market, to find out more about this magical experience.

The Queens Night Market is known for its affordability. We asked John why there was a decision to limit the prices at this market.

I wanted to approximate the experience I get as a traveler, poking around foreign markets that cater mostly to the locals, which often seem so affordable to a tourist. I can’t remember the last time I went somewhere in NYC and thought, “Holy cow, this is so affordable. I can’t wait to try everything and not blow my weekly budget.” And it occurred to me that there is no equalizer like affordability. If I wanted to create something that really prioritized diversity, it had to be uniquely accessible to the broadest possible demographic. That was the origin of the price cap.

Is there any opposition to the price cap?

Obviously the visitors love the price cap. It’s definitely one of the top three positive comments we get from our fans.

You know, while the vendors occasionally complain about the price cap, and while we probably can’t feature vendors that want to serve lobster rolls, uni, foie gras, and truffles, the vast majority of vendors love it. They keep coming back. And there’s this amazing thing about our vendors — we have so many vendors who aren’t necessarily aspiring to be the next big food hit in NYC, who aren’t even aspiring food entrepreneurs. A significant portion of our vendors come out just to share their food with our visitors and to spend time with their families, regardless how much money they make, if any. I can’t think of another market where that’s the case.

The night market is wildly successful, attracting thousands of neighbors from all parts of Queens and beyond. How do you manage such a huge influx of people over a short period of time?

The message of encouraging people to walk, ride their bike, take mass transit — it’s everywhere. It’s all over our website, our social media, our weekly event posts, our newsletters. There’s hardly a post about upcoming events where we don’t discourage people from driving. I think it’s early to say if it’s working, but anecdotally we definitely see more people walking across the Park, droves of cyclists showing up, and you can always tell when a 7-train just arrived because you can see the waves of people that come walking down 111th street to the Night Market…We even had a great cross-promotional campaign with the MTA last year, which was great.

We fully recognize that we operate in the heart of an important community, so we do our best to minimize the inconvenience on the local residents while also maximizing the good we are doing for the neighborhood, the borough, and the city.

Organizing such a large event with so many moving pieces that must be built and ripped down every weekend is quite a challenge. What’s the motivation for putting this huge amount of mainly volunteer effort into the Night Market?

There are many times throughout the year when it’s plain exhausting, especially when we hit horrible weather patterns like last year, when it rained on exactly half of the Night Markets. But at the end of the day, people love it. We may very well have been the most well-attended regular open-air market the last two years. And in the moments I think about walking away from it all, I wonder if any successor endeavor would be willing to stay committed to these values and this mission of being uniquely affordable in an increasingly unaffordable city, of prioritizing diversity and small businesses. On the good-weather nights when it looks like all of Queens and NYC is in attendance, with their parents, with their kids, having a great time…that’s the motivation.

It seems like many of the other huge events in New York City have corporate sponsors funding them. How do you compete with the staff and money of similar events.

Can you imagine any other event which operates 20+ times a year that relies almost entirely on volunteers? To me, that’s incredible and a testament to the goodwill and potential of what we are trying to build. I mean, I owe the core team of volunteers 40-something Saturdays back just from the last two years. I’m usually on-site for 24 hours on Saturdays, and the volunteers are usually with me for a majority of that.

What’s something you think people don’t understand about the Night Market?

There’s probably a perception that the Night Market is gangbusters in terms of financials given how many people come every Saturday, but I think the general public doesn’t realize how much of a burden it is keeping things affordable for visitors, which in terms means affordable for vendors, which means a real strain on our budget. That’s why I’ve always been holding out hope for a few major sponsors who see the value in the Night Market, who want to align with it, and who want to reach out to our amazing visitors. 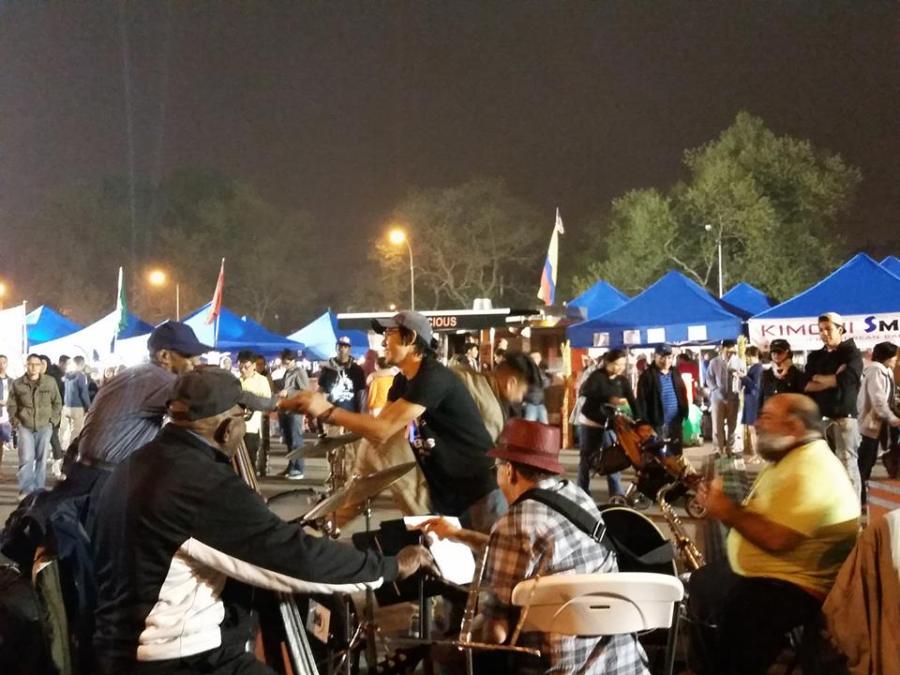 We appreciate John Wang’s insight on this wonderful Queens event. We look forward to seeing you at the night Market this year.