Kissena Park is one of the gems of Queens. Our neighborhood uses it for relaxation, exercise and transportation. However it hasn’t always looked this way and plans existed that would have drastically changed the face of the park.

Kissena Park was established in 1906 but did not attain its current borders until 1927. The Queens Corridor Park System (which includes Kissena Park) was established twenty years later in 1947. The corridor was built using land that belonged to the defunct Central Railroad of Long Island.  That railroad route still defines the park, today partially as a nature trail and partially as a bike/pedestrian trail that runs from Kissena Boulevard and Rose Avenue to 164th Street near Underhill Avenue. A look at the park map shows areas north of the railroad are full of lawns, walking paths, and active play, whereas the parts of the park south of the railroad are mostly nature trails and relatively few active use facilities.

The Parks dept released master plans (both 1977 and 1988) that, if fully implemented, could have made it look very different then it does today.

This 1988 plan eliminated the velodrome and completely changed the face of the park along Booth Memorial with a purposed ice skating rink. 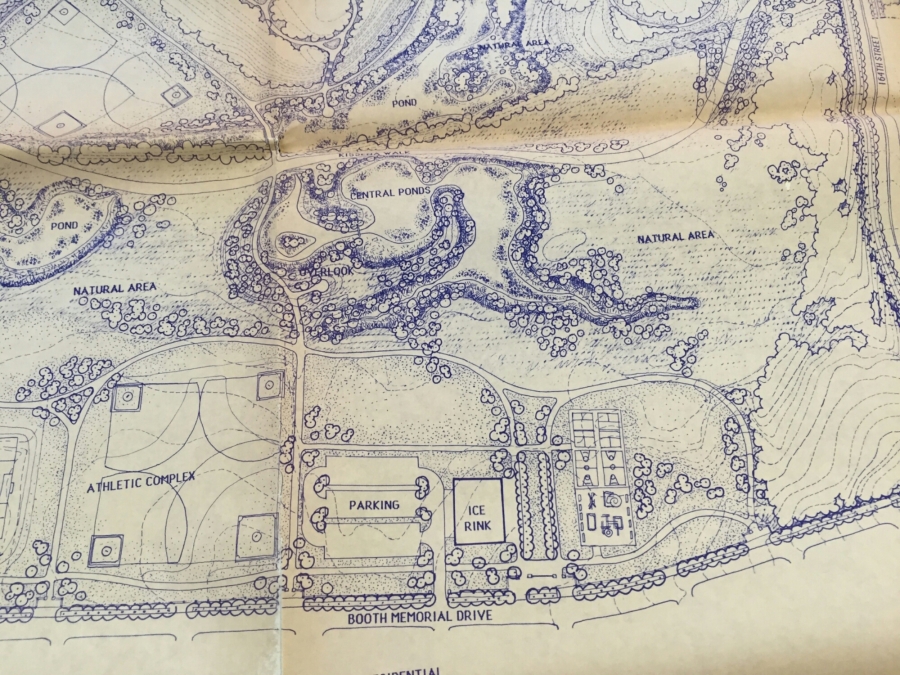 The 1977 plan is closer to the park we know today. This plan asked for a new trail above the abandoned railroad bed with overpasses both east (over 164th Street) and west (over Kissena Boulevard) to avoid the unsafe intersections. There was to be a new wooden bridge that would cross over wetland areas for pedestrian and bikes. The wooden bridges would have recalled the historic bridges that once stood across the creek and lake. The Bowne Street entrance was planned to be a major entrance to the park, leading to this trail.

This “central spine bike path, pedestrian path, bridal path” was not built.  Part of it was turned into a woodchip trail. The new major east-west route through the park drives strait through lowlands of the wetlands. Unsurprisingly this path often becomes waterlogged. Even with constant repairs sections of it sink into the ground, making it too narrow for cyclists and pedestrians to share it pleasantly.

Kissena has constantly been evolving to serve our community.   We need to be vigilant in ever improving it for the next generation.

2 thoughts on “The Ever Changing Kissena Park Greenway”