My name is Stephan Popa, and I have been a resident of the Deepdale Gardens community for over eight years, when my family moved here from Flushing. For the majority of those years, I relied on the public transit system to connect me to Stuyvesant High School, where I graduated last June, and now Fordham University, where I am now enrolled as an undergraduate in the Honors Program, where I am pursuing a degree in Political Science and Economics. During my high school years, the Long Island Rail Road proved to be a vital resource for a timely commute into Manhattan in the early mornings and, in some cases, evenings, as, by chance, some Q36 buses would line up with arriving trains. However, at other times (especially when I came home from school), I had to wait upwards of twenty minutes either at the bus stop or on the train platform.

What previously was a pill I learned to swallow as a high schooler became absolutely dysfunctional as I went to college and as my schedule changed, forcing me instead to use the express bus corridor, itself plagued with delays due to traffic on the Queens-Midtown Tunnel. No longer can I rely on that coincidental connection in the morning, as the Q36’s schedule was simply out-of-sync with arriving and departing trains in the late morning. After reading an article in the local papers about the Little Neck station parking lot often filling to capacity, with some residents opting to park at the Douglaston station instead, I decided to craft a proposal that could improve bus service and connect our communities.

The Issue With Current Service

The Little Neck Parkway bus corridor serves as the only longitudinal bus connection east of Alley Pond Park, which links the LIRR and buses at Northern Boulevard, Horace Harding Expressway, Union Turnpike, Hillside Avenue, and Jamaica Avenue. The nearest similar connection occurs at Springfield and Bell Boulevard, a combined effort of the Q27 and Q31 buses, which requires a transfer on 48 Avenue between the two routes to connect Northern Boulevard and the Long Island Rail Road with neighborhoods southward. It also serves as the last leg of the commutes for people who work at the watch factory on Little Neck Parkway north of 61 Avenue, and will serve the new Long Island Jewish testing building adjacent to it.

On the weekends, the Little Neck Parkway bus connection shuts down, isolating our neighborhoods and, along with the shortage of parking in many business districts and houses of worship, disincentives members of our communities from utilizing community resources and spending money at our community businesses. When people do decide to use community resources despite parking shortages, local residents are harmed by having their streetside parking be taken up by those visiting. Whenever the Deepdale Pool opens during the summer, finding parking in front of my house on Little Neck Parkway is near impossible. While my family could simply park in Deepdale-only spaces, many of my neighbors are elderly, and thus need a space closer to their house.

During the weekdays, the Q36 does not connect with all peak and midday trains to and from Penn Station, forcing many to take a much more inefficient method of getting to the rail station: driving. This only serves to cause congestion on Little Neck Parkway north of Northern Boulevard and ends up straining parking further in that area. Due to a multitude of people using cars to either park at the station or drop off commuters, traffic at the Railroad Crossing backs up to both the 39 Road and even the 40 Avenue intersections, making it even harder for residents in this community to navigate their streets. Sometimes, commuters from the Q36 can be seen rushing down the one-block stretch and ducking under lowered railroad crossing gates, risking their lives to make this dysfunctional connection work. During the winter, the potential for slips, trips, and falls increases as some sections of the sidewalk on Little Neck Parkway may not be properly shoveled.

If commuters have been struggling with the Q36 for the past four or so years, why has the MTA done nothing to improve and synchronise the two schedules? In Bayside, the Q31 adequately connects residents of Bayside and Bay Terrace to their railroad connection, so the idea of New York City Transit and the LIRR cooperating is not unheard of. However, when contacting my local Councilmember, their staff notified me that such a proposal had been considered already, but that there was an issue: the Q36 must make connections elsewhere along its route on Hillside Avenue and Jamaica Avenue. It also operates out of an already congested Hillside Avenue bus corridor and terminates at the 165 Street Bus Terminal, which serves ten New York City Transit bus routes and six NICE bus routes, for a total of 16 services going in and out of the terminal, all of which has to be coordinated carefully. Thus, the MTA lists our railroad connection as low-priority, simply because it cannot do much with the tools it has at hand.

Enter the Q46: a LiNk from Glen Oaks to Little Neck

Ever since 1950, the Q46 has made trips through 260 Street, serving the Glen Oaks community and connecting them to the Union Turnpike-Kew Gardens station on the Queens Boulevard Line. My proposal would be to take this branch and extend it to the railroad station via 260 St and Little Neck Parkway. Instead of turning around within Glen Oaks, the bus would run straight through 260 St in both directions and turn north onto Little Neck Parkway, following the Q36 to the Little Neck railroad station. 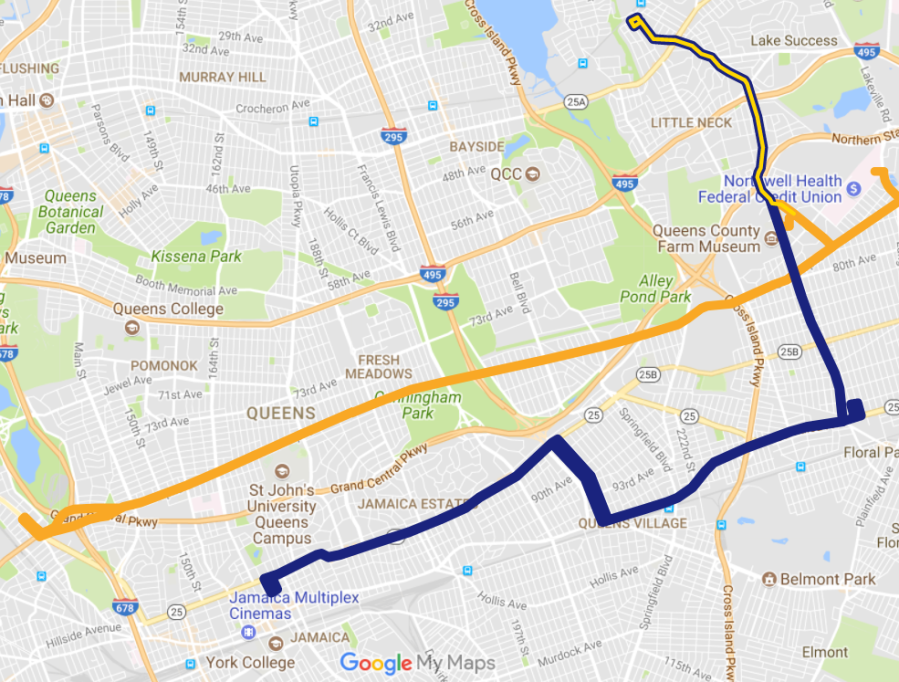 During its weekday-only service, the Glen Oaks branch sees anywhere between 4 and 7 busses per hour from 5AM to 11PM. By extending the Q46, all of that extra service will be funneled through Little Neck Parkway into the railroad station, allowing members of our community to board a bus throughout the day that better connects with their trains. Glen Oaks residents will get a streamlined bus route, without the cumbersome loop on 73 Avenue. Little Neck residents will also gain a one-seat ride to Kew Gardens, giving access to the Queens Boulevard line and the Q10, Q37, and Q60 bus routes, in addition to the Queens Borough Hall and nearby courthouses. This extra extension to the railroad will give the MTA the tools it needs to sculpt a connected schedule with the LIRR. That being said, the Q36 will still make trips to Little Neck, with current service undergoing minimal changes to better fit LIRR schedules along with the new Q46 service.

As for the schedule itself, within the schedule window, there should be a bus arriving at Little Neck Parkway at 40th Avenue (the terminal of the current Q36) about eight minutes prior to the arrival of every Penn Station-bound train during rush hours and middays, to allow adequate time to cross the railroad crossing safely and potentially purchase tickets. There should also be a bus that departs from Little Neck Parkway at 40 Avenue 6 to 8 minutes after every Eastbound train arrives at the station, to allow for commuters to walk (not run!) to the LiNk bus service safely, especially in the winter. In addition, the MTA should consider reversing the terminal loop direction, having busses turn on 40th Avenue and immediately drop off passengers as opposed to turning on 41st Avenue and going around the block before terminating.

If the MTA finds extra Q46 service that cannot fit into the current terminal loop, early terminals at either Horace Harding Expressway or Northern Boulevard (similar to the Q12) could be considered to avoid reducing service to Glen Oaks commuters or to those in Little Neck who would like to use the Queens Boulevard line instead of the LIRR.

LiNk-ing Our Community With the Q36 on Weekends

This proposal would also expand Q36 service on Little Neck Parkway, to former Q79 levels on Saturdays (which operated approximate every half an hour from 9AM to 7PM), which would allow members of our community, especially young people and the elderly (two groups less likely to own and drive cars) to take greater advantage of their own community resources, whether they be houses of worship or local businesses on one of our many business districts.

Another great community resource, the Queens County Farm Museum, could work with the MTA to expand service for their large events, such as their Farmers Markets or the Indian Pow-Wow. Similar to how extra LIRR and Metro-North Railroad service is supplied for sports games, and how some New York City Transit bus routes provide special summer service to beaches in the city (see Bx12, Q22) extra Q36 service on Saturdays and event-exclusive Q36 service on Sundays could allow local community members as well as those outside the community to access the Farm Museum more easily, without putting strain on the Glen Oaks community’s streetside parking. By marketing through the MetroCard Deals and Trips program, the MTA can incentivize people to give the Museum a visit and allow for more revenue on already-existing weekend LIRR service.

Marketing the New Service: A LiNk to Potential Users

Finally, in order for the plan to be a success, it must be marketed as a viable alternative transit option. For branding purposes, the combined service of the Q36 and Q46 bus services will be marketed as the Little Neck LiNk (with the Li and Nk standing for Little and Neck, respectively). Before and during implementation, advertisements for the LiNk will be placed at the Little Neck, Douglaston, Bayside, Flushing-Main Street, Mets-Willets Point, and Woodside stations as well as Penn. Station to explain the new service and the benefits of switching from driving to riding the LiNk, from environmental sustainability to the elimination of parking costs. Since many commuters must connect to the subway after disembarking at Penn. Station, they can take advantage of the two-hour free transfer window and save money on gas without incurring additional transit costs. Additional marketing campaigns can consist of putting flyers on cars in the Little Neck, Douglaston, and Bayside station parking lots advertising the service, and to get local businesses, attractions, and community centers to promote the new service on their websites, newsletters, and on-site. Buses may also display “LITTLE NECK LiNk” on their electronic display signs (similar to how SBS routes display “+SELECTBUSSERVICE”). Schedules for the Q36 and Q46 would have the Little Neck LiNk logo and the hashtag #littlenecklink on their schedules, similar to the Q70 LGA Link.

The Little Neck LiNk Logo, to be placed on bus schedules, and the Q70 LGA Link schedule as an example of what a LiNk schedule would look like.

This bus route transformation cannot be completed without your support, so please sign the Change.org petition to show the Community Board, your local and state elected officials, and the MTA that you want to see this proposal implemented for better community integration and connection to the LIRR. If you are interested in news regarding this proposal, including potential dates of Community Board public hearings and MTA public hearings on the matter, please email littlenecklink@gmail.com to receive updates as they develop. You can also voice your support for the proposal by contacting your local elected officials by phone or email.
40.761296 -73.733075